The art of bronze sculpture – historical and technical notes

Edited by Paola A. Lattarulo 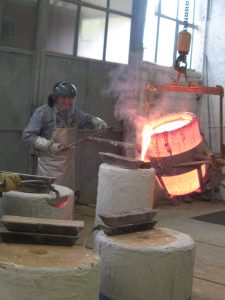 Metal working, already present in the protohistoric civilizations, is very ancient but it is only towards the end of the VI century B. C., in the age of Greek archaism, that technique became more refined and passed, for instance, from cold hammering of metal foils to a real technique of casting aimed at realizing big sculptures. Still today, in the XXI century, although with some variation, the lost-wax bronze casting process is very similar to the one used in the past. The variations particularly concern passages which see the usage of more modern materials and more efficient devices. It accurately reproduces (except for the finishing touches) the model thought and moulded by the artist; it is a technique of difficult execution, entrusted to the founder ( rarely the sculptor and the moulder are the same person).
The lost-wax casting technique consists in the creation of a wax sculpture, then wrapped into a negative of the refractory material. Then, the whole is put in the furnace where the wax burns. In the end, in the hollow space once formed we can pour cast bronze.
As to statues of small dimensions they have always used the solid cast system: that is to say the model of the artist is moulded of wax, after the channels of distribution of bronze and vents have been applied. It is later covered with a layer of refractory material, then put in the furnace: the wax liquefies, burns and leaves the hollow space empty which will be filled up with the metal that is more or less fluid depending on the different type of alloy. As for statues of medium and big dimensions, on the contrary, the process is different. As regards big statues, casting will not be full but hollow. 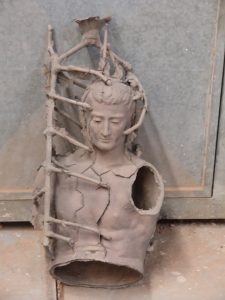 If the work is particularly big or complex (as for example the famous equestrian statue of the Roman emperor Marcus Aurelius), casting will not be of only one piece but it will be composed of more than one piece, put together with pins, nails, screws or weldings ( in the above mentioned Marcus Aurelius the horse is set apart from the figure of the seated emperor); the Renaissance group Judith and Holofernes by Donatello is composed by ten pieces cast separately and then assembled in order to compose the final statue.

The process, in the case of the hollow casting involves the realization of a core of refractory material.

The creation of this inner core used to be made in different ways during history; the basic systems that we would like to recall here are mainly two.
In the oldest system, also called direct system, the core was made as it had been a sculpture and it was made by the artist using the refractory material, with all the necessary reinforcing bars inside; it was moulded in such a way that, by applying a wax layer, one would obtain the work as it had to be in bronze. This system allows to make only one model with the great risk that if, for any reason, the casting fails (and this happens, since the casting is a system which does not reveal the result before) the work will be lost.
Already three centuries before Christ, in order to avoid this nuisance, the bronze sculpture began to adopt a different method which did not involve
the loss of the model ( method of negative with pieces); the system of pieces will be taken up again, after centuries of forgetfulness, in the Renaissance. 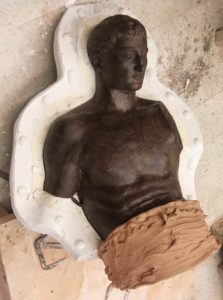 By this method, the model is moulded with clay and on it we then apply a chalk mould in pieces that can be dismantled.
Once the chalk is solidified, the pieces are removed, and we reassemble the negative, thus the inner sides of the mould are covered with the wax which will stick to it. The cavity which remains is now filled up with the earth which forms the kernel of the future sculpture (the above mentioned core).
This process is opposite compared to the described more ancient one. The latter method is still used.
The core after the cast should be removed, in order not to affect, for instance, negatively the patina, making it stained and not suitable for the reading of the sculpture volumes etc. The extraction of the inner earth is not an easy operation and still today in the ancient statues we can often find the residues of the refractory material, as happened with the “Bronzi di Riace ”(Bronzes of Riace).
After the casting the work comes back to the artist’s hands who can use cold working for the finishing touches. This stage may be more or less hard, according to the different alloy used. As a matter of fact, in the bronze sculpture, the choice of the alloy is essential, since it is composed of different percentages of copper, tin, zinc. We normally use an alloy with a high percentage of copper. If the percentages of zinc, or tin are high, the bronze will show a high degree of fluidity at the casting. In such a case we will obtain a perfect adherence of the metal inside the mould, but this will also cause a rather fragile casting which later may be cold worked in details by the artist with great difficulty. On the contrary, poor alloys, that is to say, the alloys which contain a very high percentage of copper, around 90%, will bring about a lower fluidity degree at the casting stage, and, therefore, the artist will be able to operate with cold finishing touches on the already cast statue. So it is clear that the choice of one type of alloy or the other will bring different results: more fluid alloys are more accurate, that is, more adherent to the artist’s model, 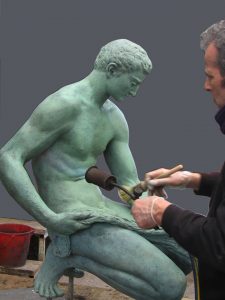 but they limit the creative aspect to the mere initial stage. Instead, less fluid alloys are less accurate compared to the original model, but they extend the creative phase also to the cold finishing, a real chiselling work.
What is really very interesting, above all from the artistic and stylistic point of view, is that the hollow-cast, obviously more complex than the full one, also enables to realize very dynamic sculptures which fit into the space in a particularly natural and effective way. This means that the relation between the sculpture and the surrounding space becomes a real connection; the one interferes with the other.
Thus, the artist feels more free to create animated sculptures, less stiff in their posture, sculptures which make space more alive and expressive: the space surrounding the sculpture is no more an empty space, but something opposite, it is part itself of the artistic creation.
The method of the mould in pieces enables also to make several models.
It is very interesting to notice as in the bronzes realized with the mould in pieces one can recognize traces left by fingers on the wax, during the phase in which it is made to adhere to the sides of the mould ( such finger marks are naturally reproduced by bronze).
The technical and operating aspects are, as one may well imagine, richer and more detailed as compared to the older method (for example today plaster is substituted by jellies, rubbers and synthetic resins). It is also obvious that the bronze art is not only confined to the sole area of sculpture, but, on the contrary, it also concerns the applied arts, from the bronze doors, very popular during the Middle Ages, to the production of bells, from the smallest objects of sacred or lay furniture to the pewter tableware and to the field of artillery, etc. In any case, the times of casting may also be long and may last several years ( let’s think of the doors for the 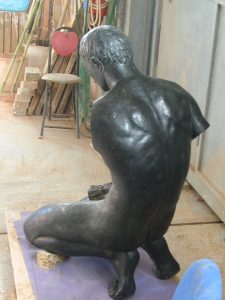 Baptistery of Florence by Lorenzo Ghiberti ), not to mention the rather high costs. The latte, (who is not only a simple craftsman, but in its own way an artist) must perform with great attention a series of operations also after the casting, such as releasing the casting bronze from the mould of refractory, disconnecting the network of channels and vents, being careful not to scratch the surface of the work.
Cold working after the casting is very important also in order to correct imperfections and defects of the casting ( small cavities, surface irregularities, etc.), but it is also aimed to the creation of some details through chisel ( useful to better define the body shapes , the edges, etc.) and the graver (for the fine lines such as a graffiti drawing or the execution of the hair). Afterwards, the statue undergoes a process of coating, hot or cold, designed to enhance the qualities of the metal.
We would like to specify that coating is not a simple covering of the surface (for instance the patina can be gold or silver), can suggest a faux antique effect, can entirely alter the surface through transparent lacquering (as for example the red coating of the Gianbologna’s studio in the mannerist epoch), etc.
Particularly refined can also be the phase, if any, of marquetry referred, for instance, to the various parts of the body: sundry fragments of materials such as ivory, stones, glass paste, copper, silver, etc… better define certain details, especially the eye.
In conclusion, the bronze art, with all its phases, from design to real processing, from casting in crucibles to the final moments of finishing touches etc, is definitely a complex technique, which comprises inside different possibilities and variants. Equally complex is the chapter of restoration and preservation of bronzes; of course, nowadays we use the most modern systems of analysis to understand the reasons of deterioration and interventions are often accompanied by high technology as in the case of the restoration of the above mentioned bronzes of Riace.